This inspired me to take a look at the software companies Flybridge seed funded during the same period. As the graph below shows, our data is quite different, with over 90% of the companies raising a Series A, just over 65% a Series B and about 50% a Series C. 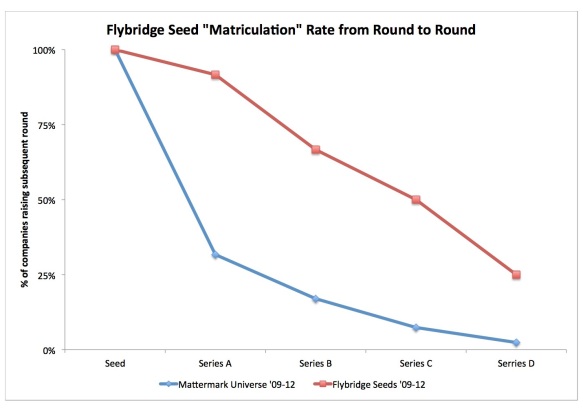 As to why our experience is so different than industry-wide data, especially at the Seed to A fall off, I am not sure. I suspect it is a combination of factors. First, on the margin we have favored slightly larger seed financings (in the $1-2M range) and those companies have had, as a result, more runway to accomplish their goals.   Second, we have favored strong, involved syndicate partners and it is often through us, and our co-investors, that the Series A investors learn about the company (virtually all the A rounds brought in a new investor). Third, we are active seed investors, but relatively selective, so we hope there is some level of quality at play. This also means our pool of companies is not huge, so I am sure serendipity is involved as well!

In their post, Mattermark noted that there are likely three reasons for the fall off: companies failing, companies being acquired, or companies becoming self-sustaining, but that they did not necessarily have all the data to determine the relative weight. We obviously do for our own companies, so here is our experience:

While it is hard to generalize from one firm’s experience, as a seed stage founder the most important lesson from this analysis is to make sure you raise enough capital to achieve critical milestones, including demonstrating product market fit, and that you align yourself with investors that have the network, relationships and credibility to help you raise subsequent rounds of capital. After that, it is all about performance with the hope that you don’t have to keep raising capital as revenue funds growth!

I'm a venture capitalist and general partner at Flybridge Capital Partners, an early-stage investment firm focused on technology companies, and an Investment Partners with XFactor Ventures. I was formerly at Greylock Partners, and reside in Boston with my wife and 4 children.

Join 37 other subscribers
My Tweets